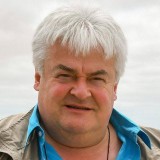 Alain was born in Brussels in 1960 and studied graphics at Saint-Luc. Alain currently lives in Liège and is responsible for the OUTLINE Graphic Designers studio, which focuses on traditional graphics. He also gives visual communication and panoramic photography classes in the Haute École Albert Jacquard (bachelor in computer graphics) of Namur, Belgium.

In 2002, Alain produced some unusual 3D stereo anaglyphical VRs panoramas that require the viewer to wear glasses with one red lens and a cyan one. English version, French version

In 2004, he published "La Grille / The Grid", an easy method for a precise location of the entrance pupil on a DSLR camera. (Français + English)

In 2009, the House of Science (Liège) ordered to him a relief image in a “View-Master” type (2 separate views) for the exhibition “Diversity of Primates”. Here is an anaglyph version. Red and cyan filter glasses needed

In april 2012, Alain has created a magical 3D high definition virtual tour of Saint-Jacques church in Liège (Belgium). If you want to fully enjoy this work, just put red and cyan anaglyph glasses on your nose and use fullscreen and zoom to appreciate details !

In June 2013, he made a panoramic picture of the Liège city. A 2.5 gigapixels panorama photographied from the top of the Interallied Memorial (Liège/Cointe).

In July 2014, he made the biggest panoramic picture of the Liège city. A 6.71 gigapixels panorama photographied from the top of the new "Tour des Finances".