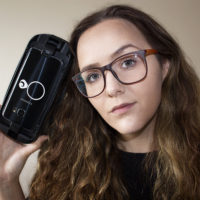 |
As well as directing and producing VR projects, Alex is invited to speak globally on the topic of next-generation storytelling and the potential of VR as a cinematic art form. She is an advisor to companies and brands about the creative processes behind VR and also the behaviors of the audiences that experience it. She is currently curating a strand of 360 films for a pop-up VR cinema in Leicester hosted at the Phoenix Cinema supported by the BFI.