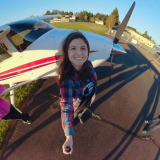 |
Hello! I'm a 360/VR filmmaker currently directing “With the Wind and the Stars”- a 360 docuseries about women in aviation. I'm also co-founder of Forever VR- a 360 video production company that specializes in VR storytelling. I joined the IVRPA to meet other VR pros & enthusiasts from around the world + learn new things.