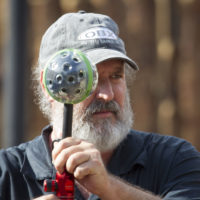 An early pioneer of computer graphics in the 80s, in the 90s began 15 years of working in the feature film world heading up large visual development teams at Sony Pictures on films like “Harry Potter and the Sorcerer’s Stone”, “Narnia: The Lion, The Witch and the Wardrobe” and “Polar Express” and many others. In 2015 Mark formed VArtisans and since then the company has filmed 360 video in 26 countries, created ground breaking installations in the Dubai Mall, created multiple VR pieces for clients like PBS, NOVA and AARP.