At the IVRPA Tokyo 2018 Conference Alexandr Reznik will share his experience behind creating New York Empire State building 45 gigapixel photo (made in cooperation with roundme.com). It was 1 week shooting 3 month stitching project.

He will also touch on another handheld Flying Willy gigapixels and share a funny story when outsourcing shooting of Flying Willy panorama in San Francisco to a non-photographer. 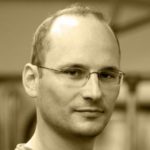 Born in 1976 in USSR (Vilnius). Working as IT trainer since 2002. Now work as IT solution architect. Alexander start photographing in 1990. In 2009 start making panoramas and opened his photography school. His main specialization is difficult to make panoramas like handheld gigapixels, handheld bracketed panoramas etc. Since 2013 Aleksandr is running panoramas stitching…