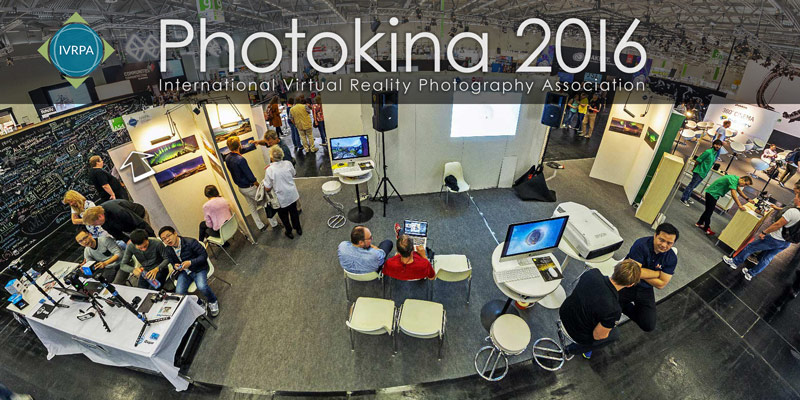 Every two years the world of photography and video comes together in Cologne, Germany, for Photokina, the imaging world's biggest exhibition and trade show.

This September every significant organisation in the imaging industries was there at Photokina 2016. It's true that economic stress has had an impact on markets; some old names have gone from the event. But as we know this has been the year of Virtual Reality: companies both old and new are climbing over each other to stake their claim in the world of VR and AR. Photokina 2016 filled half of one of its huge halls with companies and stands related to Virtual Reality and, with 'Digility', inaugurated a two-day conference that explored the current state of virtual and augmented reality development.

As in previous years the IVRPA ran a booth at the event. We exhibited members' work, provided show space for partners to present products and services, and (last but not least) hosted a busy, buzzy meeting space for all our members and VR friends that visited Cologne and Photokina. This was the go-to spot for anyone looking for unbiased, expert knowledge and information for anything relating to 360 photography and video.

This year we had three partners as co-exhibitors; Freedom 360, presenting their latest rigs and new Mantis dolly; Garden Gnome Software, demonstrating key authoring tools Pano2VR and Object2VR; and iZugar, showing its latest developments in lenses and video rigs. These products were in particular demand from the hordes of visitors looking for new and innovative 360 cameras and lenses. This even led to iZugar having to run ‘over hours’ one evening when a flock of developers from Panasonic couldn't stop asking questions.

One thing is certain: in addition to our IVRPA conferences – where partners can reach hundreds of dedicated users at once for feedback and debate – our presence at events such as Photokina helps them get in touch with the right people at the global player level.

For the next Photokina in 2018 we hope that the companies that are still focused on the US market realize the importance of this event both as the best access point for the burgeoning European market and also as an amazing source of information, connections and relationships with like-minded companies and groups.