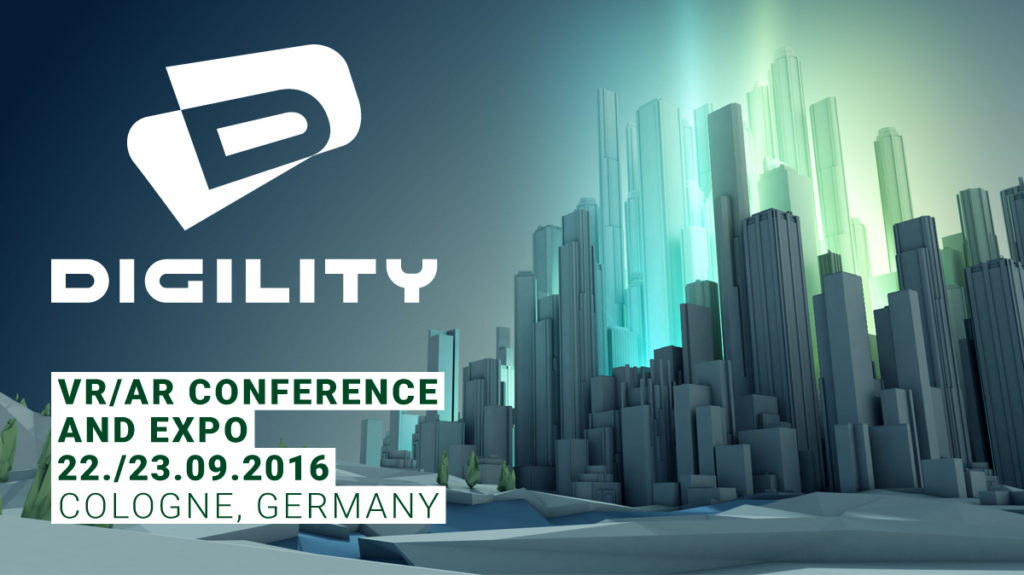 Because, ultimately, the emphatic gift blurred the boundaries between hunter and victim, between the successful and the defeated. - Philip K. Dick, Do Androids Dream of Sheep

VR is here and photokina certainly didn’t ignore it. Digility was the first VR/AR conference at photokina. Virtual Reality, as we know, is not new it’s just more accessible and everyone wants a piece. It’s apparent that VR isn’t just for the scientists and geeks anymore. So, it’s no surprise that Digility was born to address this latest movement in media.

Digility was a two-day conference packed full of talks, panel discussions, workshops and demos on all things VR. From the list of speakers it was clear that the main target audience was marketing departments, developers and content creators. There were a lot of men wearing suits — which if you’ve been working in the creative media industry, namely panorama photography and videography, seeing so many people wear suits and looking smart feels, well, odd.

The topics of the talks were compelling and there was a good mix of speakers from different areas of the business. We heard about the psychology of VR and its affects on the brain. We saw showcases from companies like Saturn and Audi on how they use VR to sell and customize their products. We also listened to tech evangelists like Robert Scoble and creatives like Alysha Naples. A repeating theme, however, no matter the subject, was empathy.

It was clear that the marketing world has already embraced VR as a point of sale tool. Both Audi and Saturn currently use (or are prototyping) VR to extend the shopping experience.

For Audi, that meant giving a customer a way to shop for a new car and most importantly to customize their car with the available options. Customers can choose colors or add or remove chrome and see what their vehicle will look like in real time. Using the HTC Vive, the user can walk around the car and get up close to see what’s under the hood and see inside the engine.

Saturn (a consumer electronics store) uses VR to extend the showroom. They worked with Innoactive to design and construct their own POS (point of sale) experience using the HTC Vive that allowed the client/consumer to enter a VR design of their own kitchen. Now, imagine if Ikea did the same. 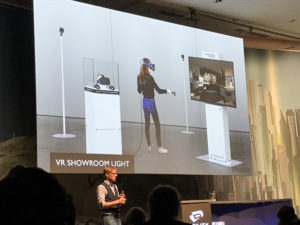 Both made the point that a high level of realism is key to a good experience. Also, as Dirk Christoph explained, the user interface must be simple and easy to use. Christoph gave insight into their VR showcase with some of their research. They found that using dissolves instead of hard cuts as transitions made people more sick. They also learned that most of the people in their research had no problem wearing headsets in front of other people and designing a kitchen in VR was found favorable.

Of course all of this relies heavily on user interface/experience design. Clemens Conrad from Vectorform shared the importance of creating a training platform in VR. Vectorform created the platform for DTE — a utility company based in Detroit, Michigan. Here, in order to create a believable environment, they needed to fully understand what the training required. Vectorform didn’t just take the word of the directors at DTE, they immersed themselves physically at the job. Their designers learned what was at stake being an electrician. This was the ultimate way to learn how to design a VR world that imitates the real world. 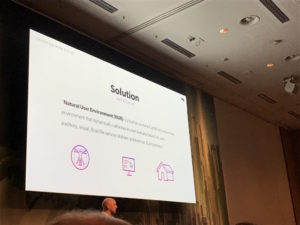 Imitating the real world is what most might agree is a key element for creating a VR soundtrack. There weren’t many talks about 360/spatial sound, but one came from a talk from Christoph Franke from Berlin Phil Media GmbH and it was on how the Berlin Philharmonic uses VR to reach the broader audience - with VR. Franke brought up a good point when discussing how to best capture the sound. How to capture the aura of the space - the feeling? When capturing sound for VR the feeling of the space and being present is what is important. Franke shared the tools they used and their discoveries. For instance, that recording spatial audio is not enough to capture that aura. Even with capturing the Philharmonic, individual HRTFs are necessary. 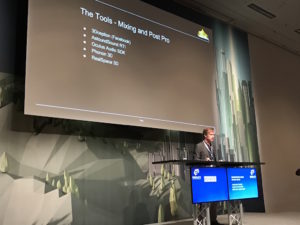 Franke moved from capturing the feeling of the space to the technical stuff quickly. But if he were to linger on that point, he would have been grouped with the others who spoke about how VR affects the human.

We learned from Prof. Dr. Peter König that it’s actually not that terribly difficult to augment our senses. In research conducted at Prof. König’s university, University of Osnabrück, they used a belt that would vibrate at certain intervals - the details I can’t remember - but the idea was that people developed a new sense of space. I wonder how that feels. 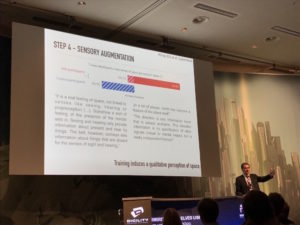 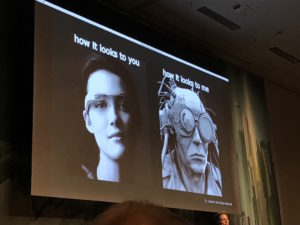 But what happens to space when it’s not limited to just the screens before your eyes? The most compelling talk was certainly from Alysha Naples. Her talk, called Beyond Screens , brought us back to the idea of the Empathy Machine and reminded us of the importance of human connection. The future will more than likely not include just a screen, but the space around us. Augmented Reality. Google Glass failed (amongst other things) because it didn’t account for everyone else not wearing them, said Naples. Once those VR headsets are on, we close ourselves off to the world — we don’t include the others in the room. Basic human nature is to be connected with one another.

If you are in screen space you are ignoring physical space.

Naples used the game, Journey, as an analogy for human connection and life in general. Journey is a game that is played with a stranger — a companion. Localization is removed and communication is done only through musical chimes. This removes the outlet for people to be cruel and bully one another and forces people to connect in a meaningful way.

It seemed clear enough that the lesson learned at the conference was to be open to the future of VR and AR and to not fall down the rabbit hole of failed tech. To realize that we as consumers, creators and lovers all require the basic need of human connection and this connection can be augmented, but not confined.

The Digility conference at photokina was a refreshing take on all things VR and AR. The talks, split into two tracks over two days, covered just about all subject areas of VR. We heard from the marketing side, the technical and developer side, the scientific side, and the investment side. If you’re just getting started in this business, the conference was a perfect platform for learning about the pitfalls and advantages of the medium as well as learning about the technology itself. Photokina proved its interest in VR and AR is strong and supportive and I am already looking forward to the next Digility.